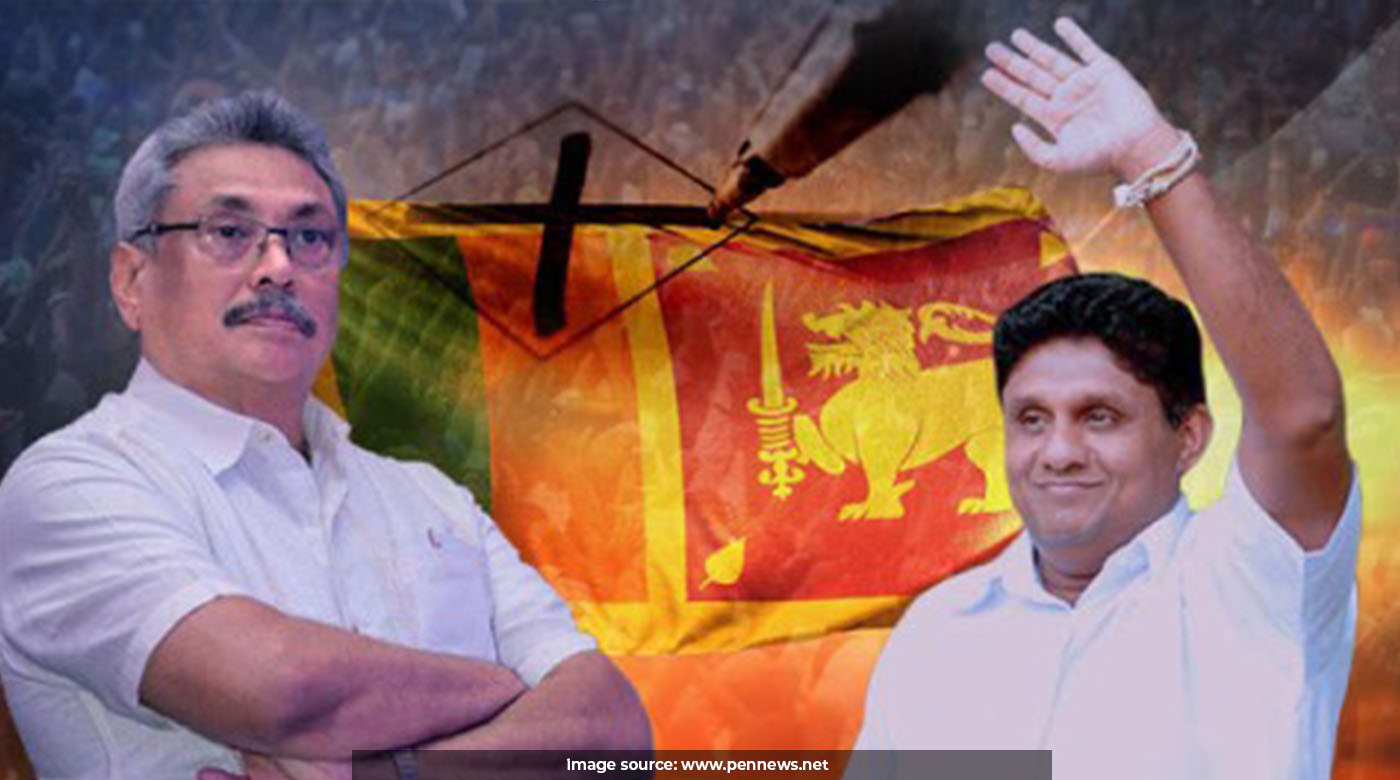 A Citizen’s Take on the Sri Lankan Presidential Election: Gotabhaya or Gota”bhaya”

If there was an election representing fascism vs democracy, it was the 2015 Sri Lankan presidential election. The Rajapkshas’ running bonkers vs the glistening promise of “Yahapalanaya”, which made most “swingers” (pun intended) to swing from blue to green, including myself. Four years down the line, the Sirisena-Ranil alliance flopped. It didn’t just flop, it took 250+ lives with it. If I were a conspiracy theorist, I would argue that the opposition bribed Al-Baghdadi to do it. Megapolis became just a mega”police” as most people initially misinterpreted and the minister of (s)ports, made sure the Silk Route is, in fact, the present Belt and Road. The Rajapaksha brothers are back at it again. Mahinda-the political personality, Gotabhaya-the executor (or executioner according to some people?), Basil-the strategist and Chamal-the one who brings order. As much as I hate to bestow the power of a country on a family, if not for these four, we’ll still be fighting a bloody war! According to research, any organization with more than 150 people cannot run without imagined realities. A common imagined reality to believe in or a firm answer to “what’s in it for me” (WIIFM) is essential. Then again, those bonds can be weak. For the first time in the Sri Lankan political history, people in power and positions that matter had a bond and trust stronger than just an imagined reality or WIIFM to drive them. The imagined and WIIFM could gather around it. As a result, we got a country where the parents don’t have to take two different buses to go to the same destination anymore.

The post-Pirabhaharan era saw the WIIFMs feasting on the royalty imparted on the Rajapakshas by the citizens, be it corruption or going beyond the law and order. Hence, the regime change in 2015. A bond scandal, easter Sunday attack, a failed alliance, and a constitutional coup later, comes the next presidential election.

With the 2019 Sri Lankan presidential election, comes the same-old blue and green, or is it? The green Sajith, not backed by the leader of green and the blue Gotabhaya, who was never a main-stream politician, or the typical “leftist” material — a man who is closer to the right-wing elite from persona and track record than to the left. Maybe that’s why the towering figure of Mahinda is visible in the background in each of Gota’s campaign posters, to bring order to the dilemma. The “Viyathgama” conventions saw the gatherings being graced by the Colombo elite and upper-middle-class, which was historically, the voter base of Wickramasinghe/UNP. Sajith, on the other hand, goes building houses and pleasing the less privileged. Maybe the tables have turned after all. As a result, Gota emerges as a personality that unites liberal, socialist and nationalist ideologies.

Having said this, out of the two main candidates (Sri Lanka doesn’t seem to be ready to vote any alternatives in, yet. Whether we should do that or not, is a different discussion), my vote in this election goes for Gotabhaya Rajapaksha. With a track record of getting shit done, Gotabhaya seems to be the one with the vision and the capability to take a united Sri Lanka forward. Detailed reasoning was published in my Facebook account over the last couple of weeks and this final post is intended to sum it all up;

In summary, his nationalist motives to see a united Sri Lanka, having lived in a developed, liberal country for an extensive period of time, and representing a historically socialist, left-wing party puts him in a unique position to be sensitive to all vertical and horizontal layers of the social structure. From an economic point of view, Gota emerges as a leader who can fast-track inclusive growth while ensuring social welfare as well. Going by the track record of Sajith, it is evident that his policies are mainly targeted at wealth redistribution, which is not sustainable (how can you redistribute wealth if you are not generating any?). Popularism or social welfare as an objective to achieve through progress is what Gota stands for, which is reasonable. However, actions based on popularism without means for growth is disastrous, which seems to be the ideology of the Sajith faction.

Sajith’s main talking point seems to be why Gota is bad and why Gota”bhaya” should take precedence over everything else. His vision has taken a relatively back seat. When his vision took priority over Gota, its focus was limited to things like free sanitary pads and “artificial stupidity”. The government that failed to deliver on the so-called “Yahapalanaya” minus the pro-Ranil group is backing Sajith. While his promise of a less corrupt government is much stronger (at least on paper), compared to the Rajapakshas, the achievements of his government over the last half-a-decade is not strong enough to keep me in green.

The social progress of every country passes certain stages. If someone’s primary factor for voting in the Sri Lankan presidential election, is the candidate’s policy on climate change, you are living in a parallel universe where tectonic plates shifted differently on earth and Sri Lanka is in fact, USA. The current status of the republic demands a president with the traits that Gotabhaya Rajapaksha has to bring to the table, compared to his negatives. At the same time, let’s hope that 2015 taught the Rajapakshas a lesson that Sri Lanka is a “democratic republic” and no royalty can make you immune to that!

In politics, as in love and many other things in life, absolute merits are not to be desired!